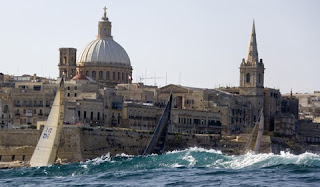 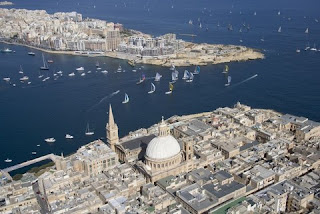 Date: 20 October 2007 – 20 October 2007
Time: 11.00hrs
The start of the Rolex Middle Sea Race is from the waters opposite the Royal Malta Yacht Club in Marsamxett Harbour and thousands of people gather on either side of this imposing harbour to enjoy this spectacle of sail.

The start line in the Harbour is arguably the most spectacular of any yacht race in the world, but it is narrow and so the race committee phase the fleet into various divisions, starting with the smallest and graduating up to the Maxis.

As you approach the Islands’ capital city of Valletta, your eyes will fix onto the Grand Harbour, with the reflection of the hearty sun bouncing off crisp breezy waves, while the majestic bastions glance into the depths below.

Grand Harbour’s reputation as one of the safest natural havens in the Mediterranean is not its only charm. This magnificent port is a living display of Malta’s rich heritage of archaeology, history, architecture, art and culture – all dating back to 7,000 years.

Nowadays, the Grand Harbour has become an irresistible scene for over 250 cruise ships, with almost 200,000 passengers onboard, which visit Malta every year on their Mediterranean itineraries.

The history of the Maltese Islands is intertwined with that of the Mediterranean Basin, with the major civilizations of the area having moored on Malta due to commercial interests with merchant galleys, or even in military operations with fully armed warships. From the times of the ancient Phoenicians to Malta’s role as home port for the Royal Navy’s Mediterranean fleet, Maltese ports have hosted a diverse range of sea craft from various countries. Now that Malta is an independent republic and a new member of the European Union, its harbours are known best to commercial ships, cruise liners, chartered and private yachts as well as nautical aficionados. The coastline’s craggy inlets and bays, most of which wonderfully secluded and inaccessible from land, provide the privilege of mooring for a swim or lunching on board in privacy. Malta boasts over 750 metres of quay space dedicated exclusively to the sailing leisure market.