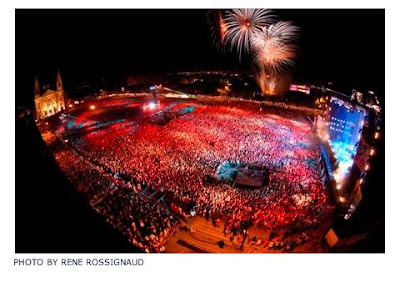 A massive international line up of top artists and local talents will grace centre stage at the isle of MTV 2008. After the great success story of 2007, with over 40,0000 people attending the largest concert ever to be held in Malta, MTV in collaboration with the Malta Tourism Authority and G7 will be holding yet another Free Festival.

Dr Francis Zammit Dimech, Minister for Tourism and Culture, said: “We are delighted to renew our partnership with MTV. Our lifestyle, climate and natural beauty provide a perfect venue for MTV. This is a unique opportunity to tell young people that Malta truly is a happening island.”

Last summer Akon, Maroon 5 and Enrique Iglesias topped the line-up for the spectacular open-air concert held in the picturesque backdrop of Il-Fosos Square in Floriana, in front of 50,000 people.

For this year’s event in June the Malta Tourism Authority is planning a three-day music festival leading up to the Isle of MTV concert. “The fusion of Malta and MTV produced an incredible feeling for the thousands who attended last year. We want to share this magic with more visitors. Our invitation goes out to all music and party lovers: come join us in Malta in June when MTV comes to town,” said Dr Zammit Dimech.

The highlight of the tour has traditionally been an open-air main event. Last year it was staged just outside the Valletta city gate. Previous performers at the Isle of MTV main event include Snoop Dogg, The Chemical Brothers, Shaggy, Garbage, The Black Eyed Peas, Jazzy Jeff, Gorillaz and Morcheeba.

Check out the link below for a chance to win an exclusive VIP trip to the Isle of MTV Malta Special 2008.
http://comps.mtv.tv/comps/isleofmtv/
http://www.visitmalta.com/event-details?l=1&e=3513