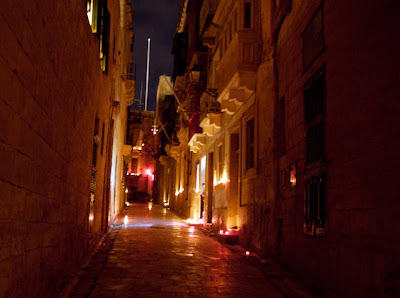 Carols By Candlelight – Saturday December 22
From the present day capital Valletta one can go by bus or by boat to the other side of the Grand Harbour to the old headquarters of the Knights, Birgu (named Vittoriosa after the Great Siege). One of the oldest villages of Malta, Birgu is the perfect symbol of the rich history of the islands. This year the Birgu Local Council in association with the Malta Tourism Authority will be organizing an ‘Carols By Candlelight’, evening of Christmas entertainment at Birgu on Saturday, December 22. It is envisaged that this event will be organized on a large scale similar in line to past editions of Birgu By Candlelight, and it is expected to attract a large number of people from all over Malta and Gozo.

It is planned that on this evening the town will have its street lighting switched off so that these will be lit up instead by a variety of Christmas decorative lighting emanating from residences. This lighting will be provided in various ways, namely: Christmas trees, cribs, mangers with statues of Baby Jesus as well other decorations that are normally associated with Christmas festivities.

During this event numerous choral concerts will be held at the churches of Birgu. There will also be well known Maltese singers performing traditional as well as modern and popular Christmas songs in Victory Square. Here a warm and inviting ambience will also be created whereat one will also be able to buy traditional Maltese delicacies together with other food stuffs including mild wine, imbuljuta, roasted chestnuts and other traditional Christmas Maltese food.

The town’s main feast bands will be entertaining the crowds along the streets of Birgu while various soloists will be playing musical tunes in various locations.

The programme will start at 18.30 and will end at around midnight.