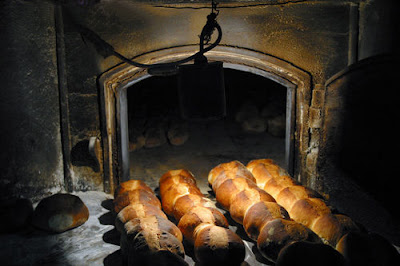 Maltese cooking is a conglomeration of traditional recipes handed down, combined with the influences left behind of the many foreign dominations, as well as a nod to its neighbors, Sicily and North Africa.

Since there has always been a lack of firewood on the island, the people of Malta long ago developed a slow-method of cooking. Food was placed in earthenware dishes over a little portable stone stove which they would sit by, constantly fanning and feeding bits of thistle and brushwood. Although gas ovens are now available, this slow simmer method is still preferred resulting in the tender falling-off-the-bone meat with deeply infused flavors.

Another charming holdover from long ago can be seen on Sunday mornings. Housewives line up at the local bakery holding a large linen-covered casserole of meat with potatoes or rice and tomato sauce, with a metal identity tag tied on. For a few coins, the woman will leave the dish to be baked, join her family at church, then stop by after services to pick up their Sunday supper along with some freshly baked bread.

One popular spot where this service is still provided by The Bakery (shown above) situated next door to Maison La Vallette. Maltese take their bread seriously… to the tune of two deliveries daily to ensure peak freshness. The small rolls or larger loafs all begin using some of the mother dough-similar to our sourdough, and are formed in traditional shapes- one being the sign of the cross. The large woodburning ovens bake the bread briefly at a high heat to produce a very crusty ouside which gives way to a delicious tender center, perfect for sopping up stews.

This same bread is used to make the ubiquitous hobs biz-zejt (pronounced hops-bees-ATE); these specialty sandwiches have a few variations but basically are: a slice of the staff-of-life, rubbed hard with a clove of garlic, then with a cut piece of tomato, followed by a drizzle of olive oil, and a sprinkle of sea salt. (Other additions can include capers, olives, or tuna.)