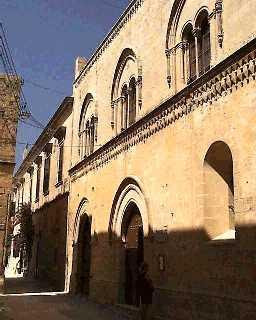 The Norman House is situated in Triq Villegaigon, Mdina, and originally was a much smaller construction. The position of the main entrance of the earliest part of the Norman House was different than it is today. The main door overlooked a street that probably existed where the staircase now stands.

The earlier part of the house follows the basic plan of the typical Maltese house or palace of that period. In plan the house at ground floor was divided into three rooms, the central one being a hall, which led to a courtyard at the back. An external staircase leads from the courtyard to the rooms at the first floor level.

The original one storey building had a very plain façade typical of the fourteenth century palace façades. These bleak barrack like façades were in fashion at that time and conscious attempts were made to obtain this effect. However the original plain façade was later changed.

The style of the architecture applied on the façade, namely the pointed arch, is fifteenth century Gothic. Another typical feature used is the triangular corbels. Here they are laid out in a double row below the string cornice and a single row below the cornice.

During the late nineteenth and early twentieth century, restoration works were carried out on the main front elevation of the Norman House. These interventions followed the principles of stylistic restoration in accordance to the school of thought of Viollet-Le-Duc. On the main façade a sham late medieval doorway with drip mouldings replaced a plain square-headed doorway and a narrow lancet window was widened in a segmental headed window. The central courtyard of the Norman House was also reconstructed to resemble examples of the late medieval buildings in Sicily.