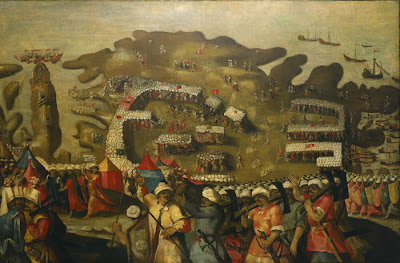 The siege, one of the bloodiest and most fiercely contested in history, was won by the knights and became one of the most celebrated events of the sixteenth century. Voltaire may have exaggerated when he said, “Nothing is more well known than the siege of Malta,” but it unquestionably put an end to the European perception of Ottoman invincibility and marked a new phase in Spanish domination of the Mediterranean. Nevertheless, the siege should not be viewed in isolation. Rather, it was the climax of an escalating contest between a Christian alliance and Ottoman empires for control of the Mediterranean, a contest that included a previous attack on Malta in 1551 by the Turkish corsair Turgut Reis and which in 1560 had resulted in the utter destruction of an allied Christian fleet by the Turks at the battle of Djerba.