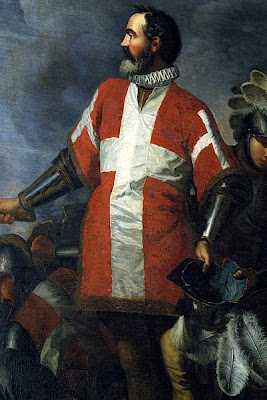 Universally referred to as “La Valette,” he was never actually called that during his lifetime. He was simply Jean de Valette, nicknamed Parisot. He fought and successfully repulsed the Turks at the Great Siege of Malta (1565), in which the vastly outnumbered Christians held out for over 3 months against an Ottoman force containing no less than 30,000 soldiers, including the notorious Janissaries, as well as the Sultan’s prized fleet of some 40 warships. The desperate battle, which saw the reduction of Fort St. Elmo, was one of immense brutality, and is regarded as one the most famous and desperate sieges of all time. As a result of the Order’s victory he gained much prestige in Europe, but he declined the offer of a cardinal’s hat in order to maintain independence from the papacy. This has been portrayed to his sense of modesty and his humility as a warrior monk. However, it has often been overlooked that as a Grand Master of the Order, he automatically had the same precedence as the most junior Cardinal within the Church and enjoyed a Cardinal’s distinction without being involved in the internal politics of the Holy See. Even from its beginnings, the Grand Master of the Order owed allegiance only to the Pope, and to this day is recognised as the head of an Order which has diplomatic recognition with the United Nations and 100 other countries.