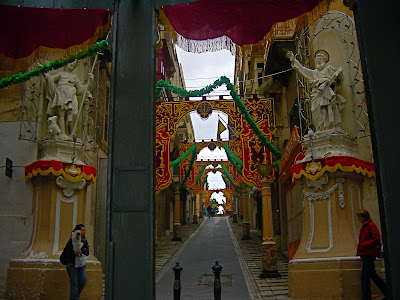 Valletta was built under the direction of the famous and great Italian architect, Francesco Laparelli of Cortona, who had already drawn up the first plans of the city before the Great Siege. Never before, had a completely new city been built in Europe straight from the drawing board, since before, towns had grown without any planning.

An interesting architectural feature of buildings in Valletta is the addition of niches with statues of saints prominently located at the corner of buildings. Some of these shrines were erected to commemorate a deceased relative or some other significant event in the lives of the people who lived in the area. Buildings were not allowed to jut out into the street, so as to narrow the passageway. Front gardens and gaps between houses were forbidden.

After Laparelli left Malta in 1570, his able Maltese assistant, Girolamo Cassar, continued the work. He is responsible for most of Valletta’s magnificent palaces, Auberges and churches. Cassar’s name, rather more than Laparelli the planner, is associated with the city. As a masterpiece of construction, Valletta became a centre of political, economic and cultural life in Europe, in which trade, handicrafts and the arts flourished.