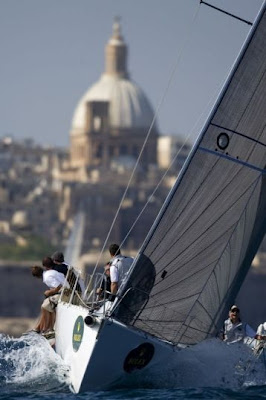 The Rolex Middle Sea Race is one of the oldest and toughest offshore racing Classics. Starting and finishing in Malta ‘s historic Marsamxett Harbour, the 606-mile race takes the fleet in an anti-clockwise direction around the Italian island of Sicily.

Co-founded by the Malta Yacht Club and the Royal Ocean Racing Club in 1968, the race features high-profile boats from the world’s top designers. Normally the field consists of more than 40 experienced sailors.

A series of inshore day races precedes the main event, giving the assembled fleet the opportunity to both acclimatise to the local conditions and to enjoy the splendours of this Mediterranean island state.

The race is a true challenge to skippers and crews, who have to be at their very best to cope with the often changeable and demanding conditions. A number of other islands are used as course markers and Ted Turner has described the event as “the most beautiful race course in the world”. The best place to watch the ships depart is from the Sliema Promenade in Valletta.