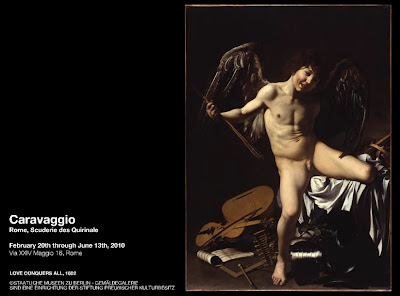 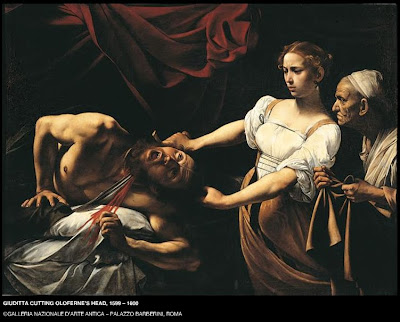 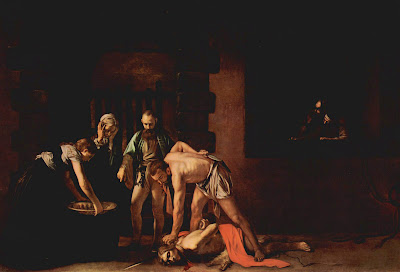 The exhibition at the Scuderie Del Quirinale in Rome, marks the 400th anniversary of the celebrated Italian artist Michelangelo Merisi, alias Caravaggio. All the works that are presented in this exhibition (being held between 20 February – 13 June 2010 ) have been carefully selected focusing exclusively on the artist’s “capital” works, mainly those works historically known to be by the master’s own hand. The only painting missing from this exhibition is the Beheading of St John which is the only signed painting by Caravaggio.
The Beheading of St John (1608) is found in the conventual church of the Order of the Knights Hospitallier of St John, known as the Knights of Malta. This painting is considered to be one of Caravaggio’s main masterpieces and is unique because of the signature painted from the gushing blood of the Saint’s head. The huge canvas is displayed in the Oratory for which it was commissioned.
Restored in the late 1990’s in Florence, this painting is one of Caravaggio’s most impressive uses of the chiaroscuro style for which he is most famous for. A circle of light illuminates the scene of St John’s beheading at the request of Salome. It is also the largest canvas that he ever painted. The oratory also houses Caravaggio’s St Jerome (1607–1608). Both masterpieces are on permanent exhibition.
The experience of viewing this painting in situ is quite unique. St John’s co-Cathedral is a magnificent church which is undergoing extensive restoration. This is the place where Caravaggio spent his time in Malta after fleeing Rome in 1607.
His freedom lasted just over a year. He was later imprisoned in Fort St Angelo, from where he later escaped to Sicily.
Daily flights from Rome, London and all the major European cities. More information from links below.
Airmalta – www.airmalta.com
Ryanair – http://www.ryanair.com
Easyjet – http://www.easyjet.com
Visit Malta – http://www.visitmalta.com/caravaggio
http://www.visitmalta.com/st-johns-cathedral-museum
http://caravaggio.com/
http://scuderiequirinale.it