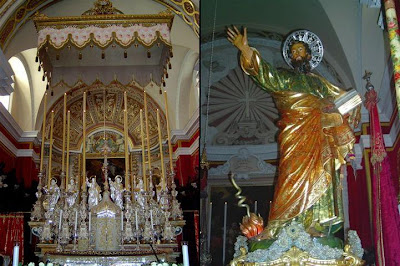 It is 1045 years since St Paul’s visit to Malta, and the majority of Maltese still celebrate his feast which is traditionally held on the 10th of February to mark the day.

The apex of celebrations will be held at St. Paul’s Church in Valletta on Thursday at 0900CET. A further mass in English will be held at 1545CET. The procession with the statue of the saint will leave the church at 1730CET. It will pass through St Paul Street, Republic Street, St John’s Street, Merchants Street, Melita Street and return to St Paul Street in order to re-renter the church. There will be two fireworks displays at the beginning and end of the procession, close to the Central Bank in Valletta.
The Church of St Paul Shipwrecked, has a sumptuous interior containing a fine altar-piece depicting the shipwreck by Paladini (1544-1614). As befits a building dedicated to one of Malta’s patron saints, it is lavish, and it houses some venerated possessions. The plan is a Latin Cross, the dome elliptical and the floor tessellated. The wooden gilded statue of St Paul is by Melchiorre Gafa and is solemnly carried through the streets on February 10 every year, the day St Paul’s shipwreck is commemorated.

Gafa’s brother Lorenzo designed the chapel of the Blessed Sacrament in 1680 and de Favray painted the altarpiece. The ceiling frescoes depict St Paul’s brief sojourn in Malta and were painted at the turn of the century, while the main altarpiece of St Paul and St Luke is from the late 16th century and by the Florentine, Filippo Paladini.

Donated to the church by Pope Pius VII in 1818 and most treasured of all, is part of the block upon which St Paul was said to have been beheaded, as well as what is believed to be part of his wristbone.