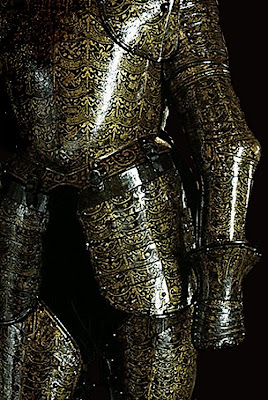 La Valette’s notorious sword and dagger, plundered by Napoleon Bonaparte as war spoils, forms part of a major armoury exhibition on Maltese arms and armour in Paris at the Musée de l’Armée, also known as the Hôtel des Invalides. The exhibition entitled ‘Between the Sword and the Cross’ – Masterpieces from the Armoury of Malta.

The exhibition deals with the main armour of the Order of St John. Most of the exhibits on display were provided by Heritage Malta. These include seven paintings from the National Museum of Fine Arts and the Palace and the Palace Armoury, a chalice and 25 pieces from the armoury including four complete sets of armour.

There are other exhibits from France including the breast and back plates of the suit of armour of Grand Master D’Omedes and La Vallette’s sword and dagger. The exhibition includes two suits of armour which had never been exhibited complete before. This has been made possible as three missing parts which are in the possession of the Royal Armoury in Leeds, England, have been taken to Paris to be assembled with the rest of the armour from the Palace Armoury.

The exhibition was set up by Heritage Malta, Michael Stroud, Curator of the Palace Armoury, Pierre Bonello, Senior Executive Exhibitions and Design, and Robert Cassar Conservator. They were assisted by staff from the Musèe des Armèe

The Hôtel des Invalides is a prestigious museum housing the third largest collection of arms in the world. It is a large complex originally built in 1670 by Louis XIV as a hospital and retirement home for wounded soldiers and war veterans. The monument now houses the Army Museum and presents military history of France from antiquity to the end of the Second World War.
the Armoury Palace of Malta. The Armoury at the Palace in Valletta, houses prestigious arms and armour dating from the 16th to the 18th centuries and is one of Europe’s most significant collections. Their presence in France and their association with the armoury collection of the Armed Forces Museum (3rd-biggest collection in the world) remain unusual, as these items have almost never left their original home of the Palace of the Grand Masters in La Vallette,
Malta’s capital. Paintings, artillery pieces and items of silver and gold ware
illustrate their history.

The exhibition is being held in one of the former refectories which is being reopened to the public after being closed for several years for restoration work to be carried out. The exhibits will be back in Malta after the 11th of January.