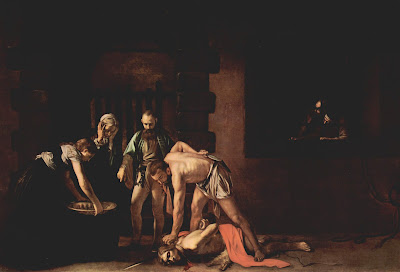 Commissioned by the Great Master of the Order of the Knights of Malta, Caravaggio’s Beheading of St John was made in 1608 for the chapel of the Co-Cathedral of St John in Valletta. It is the largest work the artist ever painted (12 feet x 17 feet) and the only one he ever signed.

The painting depicts the moment in Biblical history where St John is beheaded by King Herod to satisfy the blood lust of the seductive dancer, Salome. The scene is the courtyard of a prison and the grisly murder is observed by two other prisoners looking through a grille, while a young woman and an old crone stand ready to take the severed head and put it on the waiting platter. The blood flowing from St John’s neck drips towards the bottom of the frame and in its red stream, Caravaggio has signed his name.

On the oratory’s right wall hangs a smaller Caravaggio painting, St Jerome, which was stolen in 1984 and rescued in a dramatic operation a few months later. In it, an elderly man sits with a pen in his hand.

Caravaggio went to Malta to avoid the death penalty that had been inflicted on him after committing a murder in Rome and, with the bloodless body of Saint John, he seems to be portraying his victim’s and, at the same time, his own end. Many describe the painting as his masterwork.